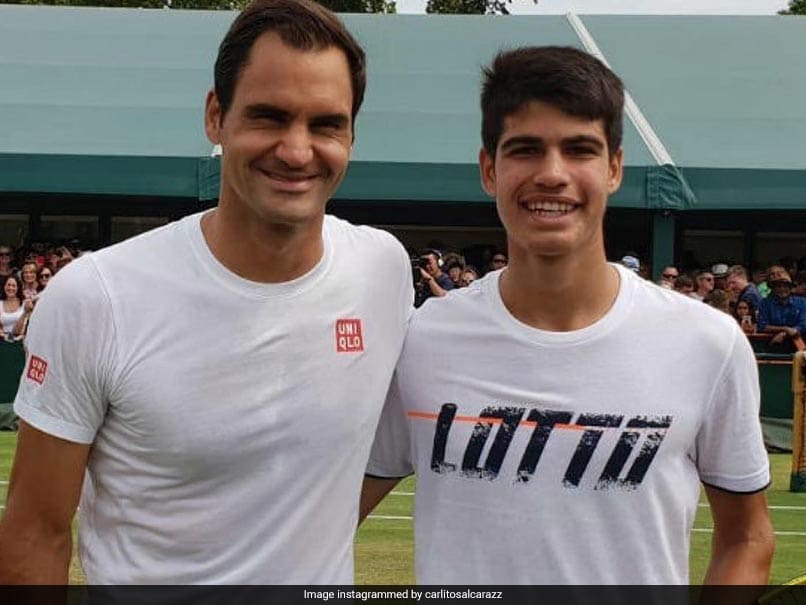 Carlos Alcaraz had shared a picture with Roger Federer after the Swiss maestro announced his retirement.© Instagram

As the legendary Roger Federer stepped onto the court at the O2 Arena in London to play his final professional tennis match, there was an outpouring of emotions across the world. Even in countries like India, where the match began late in the night, several fans stayed up to watch the historic match as Federer teamed up with long-time rival and good friend Rafael Nadal to take on Frances Tiafoe and Jack Sock in a doubles match. As the match was played out, Carlos Alcaraz, the newly crowned US Open champion, took to Twitter to basically live-tweet the whole game.

"Who's watching @LaverCup?" he asked in his first tweet of the night, along with a teary-eyed emoji.

When someone asked him "you too?" he reply was "Of course!"

"Scenes!" he wrote in one tweet, followed by one with crying emojis.

"Federer doing Federer things," he wrote in a tweet.

What followed was a series of GIFs and memes to capture the mood of the match.

As Federer and Nadal went down in their match, Alcaraz finally tweeted "Wow..." with a broken heart emoji and wrote "Thanks RF".

He signed off by sharing a picture of Federer and Nadal sitting in tears.

Anybody following the match would have been feeling the same emotions and Alcaraz's Twitter feed through the match brilliantly captured it.

After Federer had announced that the Laver Cup match would be his last professional outing, Alcaraz had taken to Instagram to share an emotional post for the Swiss maestro.

"Roger has been one of my idols and a source of inspiration! Thank you for everything you have done for our sport! I still want to play with you! Wish you all the luck in the world for what comes next!" he had captioned it.

Sponsored by Vuukle
Comments
Topics mentioned in this article
Roger Federer Rafael Nadal Carlos Alcaraz Tennis Social
Get the latest updates on Fifa Worldcup 2022 and check out  Fifa World Cup Schedule, Stats and Live Cricket Score. Like us on Facebook or follow us on Twitter for more sports updates. You can also download the NDTV Cricket app for Android or iOS.