Tokyo Olympics: Indian tennis superstar Sania Mirza and Ankita Raina will pair up in the women's doubles event in Tokyo, which could be one of India's medal hopes. 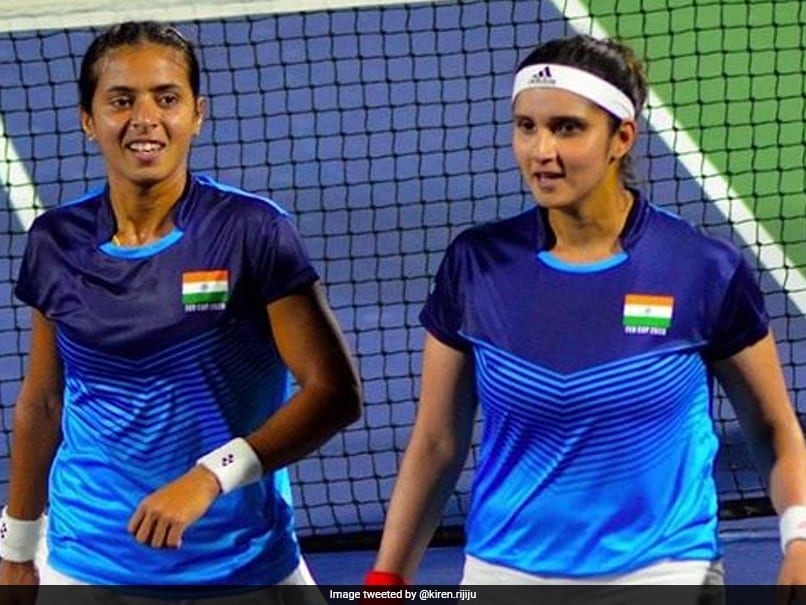 India's hopes of a tennis medal in the upcoming Tokyo Olympics rest highly on the pair of Sania Mirza and Ankita Raina in the women's doubles category. The two Indian stars have paired together only once till now, during India's Billie Jean King Cup (Fed Cup) campaign, where they showcased some fine tuning to put an outstanding record (5-0) in the competition. The pair were involved in the 2021 Wimbledon Championship with separate partners in their categories, and then practiced together for the Olympics after Wimbledon ended.

Sania, who partnered Bethanie Mattek-Sands in the women's doubles category, displayed sublime touch in their first-round win against the pair of Desirae Krawczyk and Alexa Guarachi on Court 8 of Wimbledon on July 1, winning 7-5, 6-3 in straight sets.

The duo, however, lost in the second round of the competition. 4-6 3-6 to the pair of Veronika Kudermetova and Elena Vesnina.

Looking back at Sania's Olympic history, Sania played with the likes of Sunitha Rao, Rushmi Chakravarthi and Prarthana Thombare in the previous three Olympic Games in Beijing, London and Rio de Janeiro respectively.

Her first Olympic Games didn't go as planned as she had to retired hurt in the first-round singles match against Iveta Benesova due to a wrist injury.

In the women's double category, after receiving a walkover in the first round, Sania went down to Svetlana Kuznetsova and Dinara Safina of Russia in the second-round while partnering with Rao.

Four years later, in London, Saina and Chakravarthi were defeated in the first round by China's Chuang Chia-jung and Su-Wei Hsieh.

Rio Games also proved to be a major disappointment for Sania, where she failed to go past the first round in the women's doubles category, going down to Chinese duo of Peng Shuai and Zhang Shuai.

Raina, on the other hand is a lesser-known entity compared to her star partner.

In the 2021 Wimbledon Championship, she failed to qualify for the singles event in Wimbledon after losing to America's Varvara Lepchenko 3-6, 6-7 in the qualifiers.

In the women's doubles category, Raina partnered with America's Lauren Davis in the first round against Asia Muhammad and Jessica Pegula.

The Olympic-bound Indian failed to go past the first match along with her partner, as they lost in straight sets 6-3, 6-2, but Raina played some inspiring tennis as she gathered some key experience of playing in crunch games.

Interestingly, in an all-Indian clash, Sania and Rohan Bopanna faced the pair of Ankita Raina and Ramkumar Ramanathan in the mixed doubles first round match in Wimbledon on July 2, with the former clinching the honours at 6-2, 7-6 (7/5).

Despite the Wimbledon disappointment for 28-year-old Raina, along with Sania, the duo can be expected to give higher seeded teams in the Olympics a tough challenge and hopefully, a medal-winning performance.

Comments
Topics mentioned in this article
Olympics 2020 Olympics India Sania Mirza Ankita Raina Tennis
Get the latest updates on IPL Auction 2023 and check out  IPL 2023 and Live Cricket Score. Like us on Facebook or follow us on Twitter for more sports updates. You can also download the NDTV Cricket app for Android or iOS.