Rohit Sharma forgot what the team's decision was when he won the toss at the start of the 2nd ODI against New Zealand. The India skipper eventually decided to bowl first. 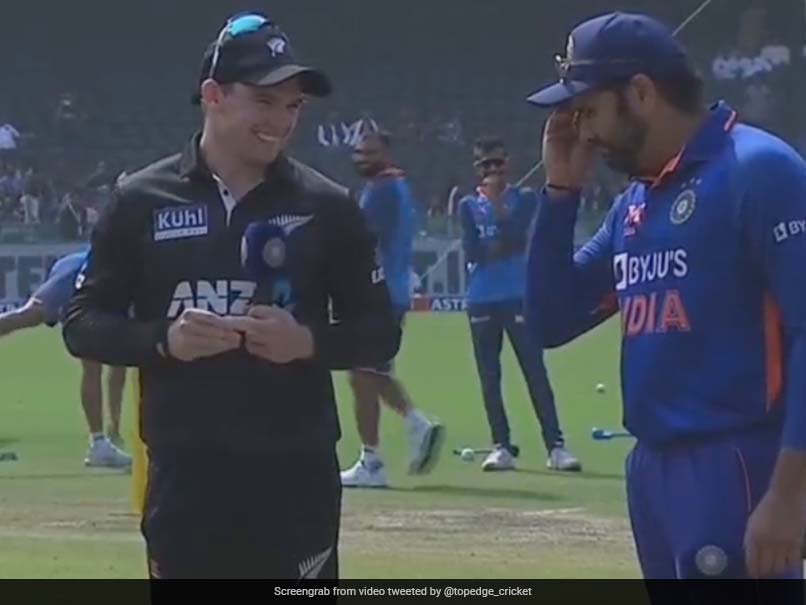 India captain Rohit Sharma had a 'brain fade' moment at the time of toss during the 2nd ODI against New Zealand in Raipur on Saturday as he forgot what the team's decision was. Rohit eventually decided to bowl first but even New Zealand's stand-in skipper Tom Latham couldn't hide his laughter at the incident. In a video shared the Board of Control for Cricket in India (BCC) on social media, the reactions of Yuzvendra Chahal, Mohammed Siraj and Mohammed Shami simply cannot be missed.

"I forgot what we wanted to do, had plenty of discussions with the team about the toss decision, just wanted to challenge ourselves under difficult conditions, but we'll bowl first. Was a good test for us, knowing that the wicket will get better to bat on and that was the challenge in front of us," Rohit had said at the time of toss, with a smile on his face.

Seeing Rohit scratch his head during the time he wasn't able to decide whether the decision was to bowl first or bat, the likes of Shami, Siraj and Chahal were warming up right in the line of the camera.

The trio was spotted laughing as Rohit struggled to decide what he wants his team to do first. Here's the video:

A funny moment from Rohit during toss time!!!pic.twitter.com/iWXCLLBmlB

India secured a thumping 8-wicket victory over New Zealand after bundling out the visitors for just 108 runs. Shubman Gill (40 not-out) and Rohit Sharma (51) were the top-scoring batters in the team.

At the end of the match, Rohit reflected on his side's performance, saying: "The last five games, bowlers have really stepped up. Whatever we have asked of them, they have stepped up and delivered. You don't usually see this type of seam movement in India, you generally see it outside India. These guys have some serious skills, they work really hard and it's great to see them being rewarded. We trained yesterday and the ball was nipping around under lights. We knew that if they had 250 or so, it might have been challenging for us but that was the point of opting to chase. We batted first last game, so the idea was to challenge ourselves."

With a 2-0 lead under their belt, India have already sealed the fate of the series. In all likeliness, a few changes could be made in the playing XI for the final match.

Mohammad Shami India vs New Zealand, 2023 Social Cricket
Get the latest updates on IPL Auction 2023 and check out  IPL 2023 and Live Cricket Score. Like us on Facebook or follow us on Twitter for more sports updates. You can also download the NDTV Cricket app for Android or iOS.