India bounced back well to beat Malaysia 3-2 after losing back-to-back matches to start with and Sardar Singh's men would draw from the new-found self-belief when they come face-to-face against the marauding Australians. 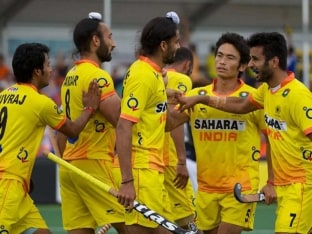 India celebrate after beating Malaysia in the Hockey World Cup.

Buoyed by their triumph over Malaysia, India will face their toughest challenge so far when they take on unbeaten reigning champions Australia in their final preliminary game of the Hockey World Cup on Monday.

The Indians bounced back well to beat Malaysia 3-2 after losing back-to-back matches to start with and Sardar Singh's men would draw from the new-found self-belief when they come face-to-face against the marauding Australians.

"The team is all set to take on Australia. Our last match against Malaysia will act as a motivation as we are all looking forward to play the defending champions. There is positivity in the dressing room which will act in our favour on the field," an upbeat Indian captain Sardar said ahead of the tough match.

India currently have four points from as many matches after drawing the game against Spain. Australia have already made the semi-finals with four thumping wins, while India are in the fourth place in Group A.

"India are a young team and we are moving positively. We need to keep belief in our ability to put up a good contest against the best sides in the world," said coach Terry Walsh.

"Our first objective is to ensure we don't allow chances in the closing stages, and we should start taking our chances and play to a plan that we have prepared," he said.

Australia have faced little opposition in their league matches so far. The way they hammered England 5-0 on Saturday showed that the team was determined to live up to the promise to present a World Cup victory to their coach Ric Charlesworth, for whom this will be the last World Cup in any capacity.

Comments
Topics mentioned in this article
Hockey Hockey World Cup 2014
Get the latest updates on IPL Auction 2023 and check out  IPL 2023 and Live Cricket Score. Like us on Facebook or follow us on Twitter for more sports updates. You can also download the NDTV Cricket app for Android or iOS.