The seventh day of the FIH Odisha Hockey Men's World Cup 2023 brought the conclusion of the group stage action from Pool A and Pool B, as Australia and Belgium topped their groups, booking their quarterfinals spots 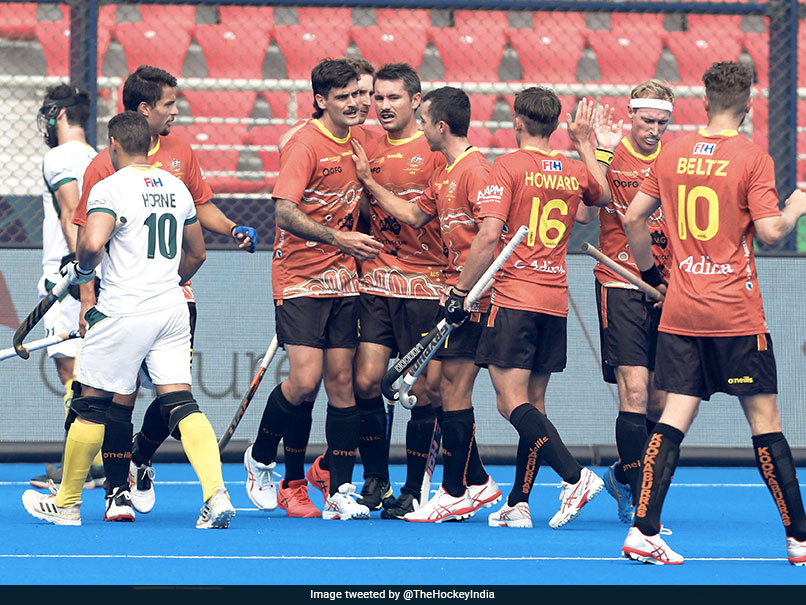 The seventh day of the FIH Odisha Hockey Men's World Cup 2023 brought the conclusion of the group stage action from Pool A and Pool B, as Australia and Belgium topped their groups, booking their quarterfinals spots, while Argentina, France, Germany and Korea now move on to the crossovers. Incredibly, all four games saw at least one player score a hat-trick, with the second game between France and Argentina producing two, as Blake Govers (AUS), Victor Charlet (FRA), Nicolas della Torre (ARG), Tom Boon (BEL) and Niklas Wellen (GER) all scored at least thrice for their teams. A total of 38 goals were scored across the 4 games on the day, for a whopping average of 9.5 goals per game.

In the opening game of the day, the Australian attack showed out in the first half going into the break up 7-1 to put the result beyond much doubt. South Africa gave a better account of themselves in the second half but Australia still ran out of comfortable winners with a 9-2 final scoreline.

Argentina and France then played in an absolute thriller that included 2 goals scored by the teams in the final 53 seconds. The game ended 5-5, keeping Argentina above France in the final pool standings as both teams head into the crossovers.

In Pool B, Belgium handled their business first registering an impressive 7-1 win over Japan, with star striker Tom Boon opening his account in the World Cup with a 5-goal performance, taking Belgium's goal difference to plus-11.

Germany faced Korea in the final encounter, needing to win by 9 goals to overtake Belgium in the Pool B standings and earn direct entry into the quarterfinals, but an impressive 7-2 was not enough as they join Korea in heading to the crossovers from Pool B.

After a brief hiccup in their game against Argentina, Australia were back to their scoring best right from the first whistle in the game against South Africa. Blake Govers who scored the all-important equaliser against Argentina was on fire, scoring 4 times in the first half to go level with Jip Janssen and Thierry Brinkman on the top scorer list. South Africa did manage to get on level terms after Australia's opener, but Australia added 6 goals in between the 10th and 28th minute to make the South African equaliser in the 8th minute seem like a distant memory by the time the half-time whistle blew.

Jeremy Hayward added an 8th for Australia in the 32nd minute, but that would be the only goal scored in the 3rd quarter as South Africa tightened their defence. Tevin Kok had a great opportunity to score a goal as the time expired in the 3rd quarter, but his attempted lob over the keeper sailed over the goal. South Africa's resurgence continued in the final quarter as well, as Tim Brand's early 4th quarter goal was cancelled off by a late goal by Tevin Kok to keep the scoring in the final quarter balanced.

Blake Govers was awarded player of the match for his 4-goal performance and said, "We got our goals early which was good because we weren't very tidy in our performance in the second half. Overall it has been a good start to the World Cup."

France have been a bogey team for Argentina in recent years earning important wins against the Leones in the 2018 World Cup, as well as the FIH Hockey Pro League in 2022. With France coming into the game off a big win against South Africa, and Argentina coming off an impressive draw against Australia, the stage was set for another high pressure encounter. And the teams delivered on the promise early, with Argentina scoring early in the 3rd minute through Nicolas Keenan, and France answering back in the 11th minute through Etienne Tynevez, as the teams went into the half on level terms.

Momentum swung multiple times in the 3rd quarter as Argentina scored early to take the lead through Nicolas della Torre, before France snatched the lead back through a Victor Charlet brace. della Torre scored once again from a penalty corner to bring Argentina back level, setting up an exciting final quarter. Both teams traded a goal each in the 4th quarter and the game looked like it was heading for a draw when France won a penalty stroke with just 53 seconds left in the game, which was dispatched once again by Charlet, for his fourth goal of the game! Argentina, unwilling to give up, earned a string of penalty corners in the final seconds and scored with 6 seconds left on the clock to lock up the second spot in the group, as France finished third.

Victor Charlet was awarded player of the match and said, "Good to get a hattrick but I would have preferred a win. We really wanted to finish second in the group, but we will take the confidence from this performance on to the next game."

With a draw in the previous game against Germany, Belgium needed a big win against Japan to try and seal their spot at the top of Pool B and earn direct qualification to the quarterfinals, and a first half hat trick by Tom Boon gave them a 4-goal lead by the end of first half, and increased their goal difference to +9, with another 30 minutes to further extend their lead over Germany, who had a +3 goal difference with one game to go in the final match of the day against Korea.

Japan had a much better start to the second half, keeping Belgium out in the 3rd quarter and scoring their first of the game early in the 4th. But Belgium had a much better finish to the game scoring thrice in the final 10 minutes, including 2 more goals for Tom Boon, to win with a 6 goal margin and bump their overall goal difference to +11.

Tom Boon who became only the 4th ever player to score 5 goals in a World Cup game, was awarded player of the match and said, "I think after scoring no goals in the first quarter, it's good to get 7 goals and a +6 goal difference in the final 3 quarters. Looking forward to playing in the knockouts going forward."

The final game of the day was also the final game of the pool stages, with Germany needing a win by 9 goals to overtake Belgium in the Pool B standings and gain direct entry into the quarterfinals, but against an in-from Korea team that would prove to be too big a mountain to climb for the Honamas. Germany did start the game brightly, scoring in the second minute of the game, through Niklas Wellen, but by the end of the first quarter, Korea had pulled a goal back to keep the scores level. Wellen, who is in red-hot scoring form, gave Germany their lead back before their half-time, but with just a 1-goal lead halfway through the game, German hopes of topping the group were rapidly fading.

The second half started frantically as both teams traded end-to-end counter-attacks. Korea had the best chance in the 32nd minute with Junwoo Jeong finding shooting space in the German circle, but his venomous hit sailed inches over the goal. Wellen increased the German lead completing his hat-trick in the 41st minute and Gonzalo Peillat added another for the Honamas in the 43rd minute from their 6th penalty corner of the day.

The 4th quarter saw Germany overrun Korea in attack, scoring thrice in the first 7 minutes, but Korea retreated into their defence as German attempts at overtaking Belgium fell narrowly short. Korea added a second goal in the final minute as they won a penalty corner while the Germans had subbed their keeper out for an outfield player.

Hat-trick hero Niklas Wellen was awarded player of the match and said, "We knew how many goals we needed to finish top of the group, and we fell short by a couple of goals, but 2 wins and a draw from the three pool stage matches is a very good result for us on the whole."

What Made Sania Mirza Cry?
Comments
Topics mentioned in this article
Australia Belgium Argentina Hockey World Cup 2023 Hockey
Get the latest updates on IPL Auction 2023 and check out  IPL 2023 and Live Cricket Score. Like us on Facebook or follow us on Twitter for more sports updates. You can also download the NDTV Cricket app for Android or iOS.