A below-par India beat tournament debutants Wales 4-2 in their final pool match but will have to wait until Sunday, when the play New Zealand in the crossover game, to book their place in the quarter-finals of the FIH Men's World Cup 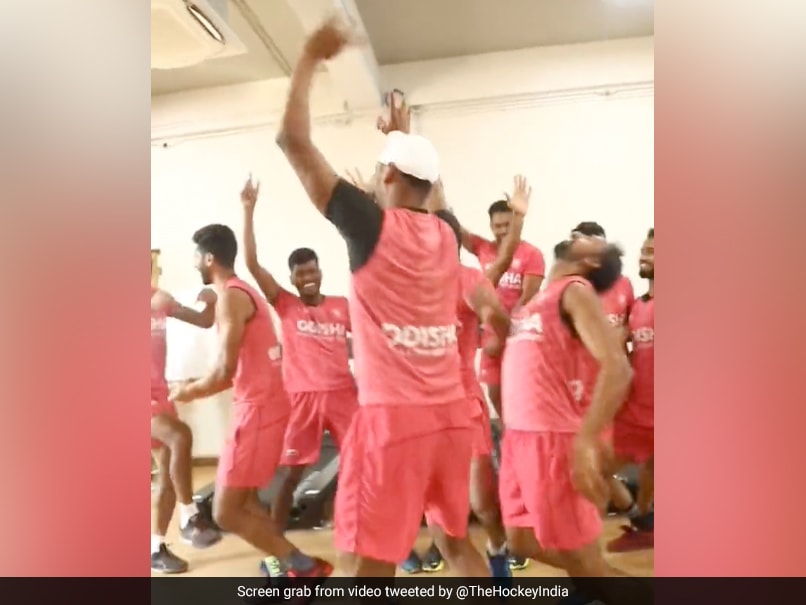 Despite beating Wales 4-2, India finished second in the group behind England.© Twitter

Team India failed to book their place in the quarter-finals of the FIH Men's World Cup, despite beating Wales 4-2 in their final Pool D match on Thursday. Needing to win by a margin of eight goals to qualify directly for the quarter-finals on Thursday, India finished second in the group behind England. In the match, Akashdeep Singh (32nd and 45th minutes) struck twice for India, while Shamsher Singh (21st) and Harmanpreet Singh (59th) got the other goals for the hosts. On the other hand, Gareth Furlong (42nd) and Jacob Draper (44th) found the net for Wales.

After the match, it was time for celebrations and the Indian players grooved to a famous song of Daler Mehndi, titled 'Bolo Ta Ra Ra'.

Both India and England ended their pool engagements on seven points each after winning two matches and drawing one, but the European side topped Pool D on the basis of superior goal difference.

England, who had outclassed Spain 4-0 in the earlier Pool D match here, have a better goal difference of plus nine as against four of India.

When two teams are on equal points and have won the same number of matches, the ranking is decided by goal difference.

England, who are in the quarter-finals, will have to wait for the results of the crossover matches to know their opponents. They will play their last-eight match on January 25 against the winner of the second-placed team in Pool A vs the third-placed side in Pool B.

The last-round matches of Pool A and Pool B will be played on Friday in Rourkela, the co-host venue.

Playing in windy conditions with the mercury dropping to 20 degree celsius at the packed Kalinga Stadium, India played their worst match of the tournament. The hosts dominated all throughout but their goal-scoring problems continued for the second match in a row.

Harmanpreet Singh's side earned seven penalty corners and at least half-a-dozen more scoring opportunities but their forwards wasted most of them.

Wales, ranked 14th as against India's fifth, punched above their weight as their defence did a commendable job in the face of incessant attacks.

The first chance of the match fell to Mandeep Singh in the first minute but his reverse-hit was saved by the Wales goalkeeper.

Another reverse-hit in the ninth minute, this time from Nilakanta Sharma, was blocked by a Wales defender.

Mandeep had another try from the top of the Wales circle in the first quarter, but the Wales goalkeeper denied India a goal.

India earned a penalty corner in the first minute of the second quarter but captain Harmanpreet's feeble drag-flick did not create any trouble.

Mandeep earned India's second penalty corner in the seventh minute of the second quarter. Harmanpreet's drag-flick rebounded off a defender's stick but Shamsher's powerful shot from top of the circle beat the Wales goalkeeper to hand India the lead.

Wales earned their first penalty corner in the second minute of the third quarter but wasted it.

Just a minute later, Akashdeep found himself clear on the top of the Wales circle and his fierce hit beat the rival goalkeeper for India's second goal.

India got their fourth penalty corner just after the second goal but Wales goalkeeper Toby Reynolds Cotterill blocked Harmanpreet's drag-flick. Amit Rohidas too tried his luck with penalty corners but he too was ineffective in the 11th minute of the third quarter.

A few seconds later, Harmanpreet's flick was saved by the Wales goalkeeper.

Soon after, India's defence was breached for the first time in the tournament with Furlong sounding the board from Wales' second set piece three minutes from the end of third quarter.

Less than a minute before the end of the third quarter, Wales stunned the vociferous home crowd as they equalised through Draper, who beat Indian goalkeeper PR Sreejesh all ends up from his side's third penalty corner.

Akashdeep brought the deafening roar of the home crowd back with his thunderous reverse shot in the first minute of the fourth quarter, which gave India the lead again.

Two minutes later, Sukhjeet Singh could have increased the lead for the hosts but he failed to beat the Wales goalkeeper, who produced a brilliant save.

Abhishek found the Wales net later but his goal was disallowed.

A minute before the final hooter, Harmanpreet scored his and India's first goal from a penalty corner to make it 4-2.

India Wales Hockey World Cup 2023 Hockey
Get the latest updates on IPL Auction 2023 and check out  IPL 2023 and Live Cricket Score. Like us on Facebook or follow us on Twitter for more sports updates. You can also download the NDTV Cricket app for Android or iOS.