The Belgium revolution starts in Tottenham, but spreads across Europe 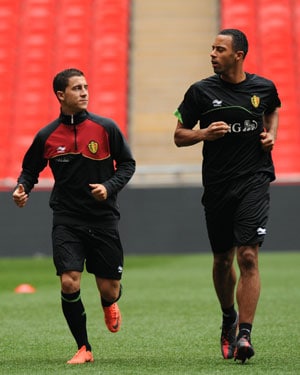 For the first time in history, three players from Belgium were in the starting line-up for an English Premier League side. Jan Vertonghen, Mousa Dembele and new signing Nacer Chadli started for Tottenham Hotspur in their 1-0 victory over Crystal Palace on Sunday.

Vertonghen, as a central defender, looked assured throughout while Dembele was a bit off the pace at Selhurst Park but all eyes were on Chadli as he deputized for Gareth Bale on the left wing. The 24-year-old worked his socks off but lacked a cutting-edge in the final third. In injury time at the end of the first half, Aaron Lennon lobbed a cross towards the far post. Chadli climbed above his marker but could only 'shoulder' the ball over the bar. Chadli had an easier chance in the second half but his shot was tame and hit straight at the keeper. For the most part of the match Chadli looked eager but nervous - a characteristic that can be used to describe the most exciting of Belgium's current players.

Placed 40th last September, Belgium currently sit 10th in FIFA rankings. They sit top of their 2013 World Cup qualification group, three points ahead of Croatia with three games to play. Marc Wilmots' side are all but guaranteed qualification to the World Cup, for the first time since 2002 - a minimum requirement for the talent they possess.

In their previous international encounter, an entertaining 0-0 draw with France last week, Belgium fielded a central defense of Daniel Van Buyten and Vincent Kompany with full-backs Sebastien Pocognoli and Toby Alderweireld. Nicolas Lombaerts and Jelle van Damme came off the bench in a side without the discernible services of Vertonghen and Arsenal club captain Thomas Vermaelen. Premier League stars Kompany, Vertonghen and Vermaelen are guaranteed starters when selected, while Alderweireld can slot in at right-back. In the friendly the misfiring Karim Benzema (who hasn't scored for Les Blues for over a year) was kept comfortably at bay.

The two-prone strike force of Romelu Lukaku and Christian Benteke is a mouth-watering proposition but the obvious talents of Belgium lie in a diamond-studded midfield. Viewers of the Premier League are familiar with the likes of Dembele, Eden Hazard, Marouane Fellaini and Kevin Mirallas but it is in continental Europe that their less-heralded players lay.

Midfielder Axel Witsel is infamous for his 40million Euro transfer to Zenit Saint Petersburg last season but as he has shown with the Russian club and previously with Benfica, his box-to-box abilities are on par with Yaya Toure. And, if not for Fellaini, Witsel would surely boast the most enigmatic hairstyle in the side. Another gem is Cagliari's attacking midfielder Radja Nainggolan. The 25-year-old has recently attracted interest from the likes of Juventus, Napoli and the two Milan clubs. Following in their footsteps, Kevin de Bruyne returned to Chelsea after an impressive loan spell at Werder Bremen last season while former Manchester United target Steven Defour is making waves at Porto.

In the often-fractious environment of Belgium football, there is real hope with their current crop of players. The 2014 World Cup may come too soon for this young side but Belgium should be one of the favourites at Euro 2016 in France.

Comments
Topics mentioned in this article
Roberto Soldado Nacer Chadli Christian Eriksen Bayern Munchen Football Tottenham Hotspur Fulham
Get the latest updates on IPL Auction 2023 and check out  IPL 2023 and Live Cricket Score. Like us on Facebook or follow us on Twitter for more sports updates. You can also download the NDTV Cricket app for Android or iOS.