Is stripping the only way for women players? 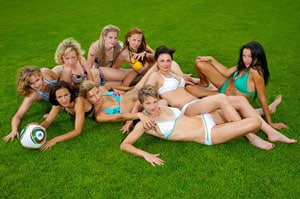 The FIFA World Cup is on and there is barely any buzz. Really? Is that even possible

The FIFA World Cup is on and there is barely any buzz. Really? Is that even possible....after all isn't the FIFA Cup the biggest sporting event globally, and also probably the most watched - around 1 billion people tuned into at least a part of the 2010 edition final. Well, the explanation is simple. It isn't the boys slugging it out on the field this time, but their female counterparts.

As any artist - be it a musician, an actor or a painter - craves for an audience to showcase his or her talent, so do these women footballers. Sadly, skills alone aren't enough for them to pull in the crowds. What else would explain the decision of a few members of the French women's football team to pose nude for a photo shoot in a bid to draw attention to their sport.

Gaetine Thiney, Elodie Thomis and Corine Franco said they posed provocatively for the photos, which appeared in the German tabloid Bild, to spark controversy and generate publicity, hoping at least that would get people to flock to the stadiums to watch the on-field action.

The trio posed for the pictures under the motto: "Is this how we should show up before you come to our games?

And, the Frenchwomen are not alone. Players from Russian club FC Rossiyanka from Krasnoarmeysk near Moscow, one of the top clubs in the Russian Women's Premier League, went a step further. The girls from the club that has won the Russian Premier League 3 times and also qualified for the Women's Champions League twice, came out to play in bikinis in hope of wooing back supporters to the stands. Unsurprisingly, even their publicity shoot to promote the event received good coverage on news networks in Russia. Unfortunately, nothing gets people's attention quicker than a scantily dressed woman. The players realize that.

And, so does the Badminton World Federation, who had recently come up with a new rule that made it compulsory for women shuttlers to wear skirts. Ridiculous right? I know the men may not agree. The BWF introduced the rule to make the sport more presentable and glamorous in a bid to attract viewers and sponsors, quite like tennis. The rule that was supposed to come into play from June 1, however, had a short life and was scrapped even before its inception, after meeting with protests from several quarters. A good riddance I would say.

Yes, other sports should learn from Tennis, but not in the glamour department, instead how it is run by the governing body. Equal prize money at the Grand Slams, even though it came only in the last couple of years, that too after a long struggle, was a huge step forward. Although the men may still get a preference in terms of courts, with Centre Court mostly playing host to seeded male players, the media coverage for both sexes is nicely divided and satisfactory.

Proper marketing by the WTA, which works separately, but, in tandem with the ATP, is also a huge factor. This is not to say that tennis isn't a glamorous sport, it most certainly is, probably one of the most, but nobody here is forced to dress up alluringly or accessorize. Whoever does - be it Serena Williams or Bethanie Mattek-Sands - does it out of choice and frankly every sport also needs characters like them.

Women have taken giant leaps across all fields around the world and surely in sport too, but they still have a huge mountain to climb. Right now there is only one game that I can think of where the women would surely come out on top of the male players in terms of viewership, that too without trying hard. Yes, strip poker. But it isn't even an official sport. They should probably just make it official. That way at least there will be one sport where women will not have to go the extra mile to get their share of the spotlight.

Comments
Topics mentioned in this article
Football FIFA
Get the latest updates on IPL Auction 2023 and check out  IPL 2023 and Live Cricket Score. Like us on Facebook or follow us on Twitter for more sports updates. You can also download the NDTV Cricket app for Android or iOS.