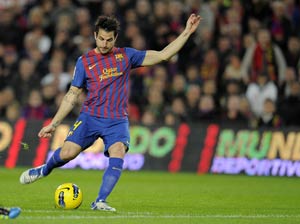 Placed on a podium by coach Gerardo Martino, Cesc Fabregas was directly involved in five of Barcelona's seven goals in their opening La Liga fixture.

After a summer of interest (and two bids) from Manchester United, Cesc Fabregas took just three minutes of the new season to show why Barcelona would be mad to let him go. Latching on to a pass from Xavi, Fabregas was through on goal. He could have scored himself but unselfishly squared the ball to an unmarked Alexis Sanchez to tap home as Barcelona would begin their 7-0 rout of Levante.

Ten minutes later, Fabregas, acting as the target-man, chested the ball down for Lionel Messi - who would go on to play a one-two with Pedro and get his name on the score-sheet.

Another ten minutes of tiki-taka passed by when Fabregas was at the receiving end of a defense-splitting pass by Messi. The Spaniard attempted to slide the ball past the keeper, who could only parry the ball to the waiting feet of Dani Alves.

Just before the half-time whistle, Fabregas was at it again, playing a perfectly weighted job to Xavi, who nudged past the keeper. Barcelona had scored six by then and Fabregas, who in the absence of Andres Iniesta, was placed on a podium by coach Gerardo Martino and flourished in his role as the side's most advanced midfielder.

Barcelona may have stepped off the gas in the second half but Fabregas carried on from where he left of. There was a ten-minute period in the second-half when match centered around the 26-year-old. A glorious lob to Pique, six yards from goal, was wasted by the defender while Messi surprisingly fluffed his lines in similar circumstances. Fabregas would set up Adriano on the left wing but the full-back could only shoot straight at the keeper.

After the surprise substitution of Messi and the introduction of Iniesta, Fabregas was pushed further forward - almost in a false-nine role. Seizing on a defensive mistake, Fabregas rounded the keeper and had the goal at his mercy. Former Northern Ireland striker Gerry Armstrong, on commentary, was willing him to score 'the goal he deserved'. But Fabregas would play a simple pass to Pedro, who grabbed his second of the game.

He may not have scored but the Man of the Match performance that Cesc Fabregas put in showed why he is indispensable to the Catalans. United may have hoped that an absence from the first team would push him towards the exit door, but a hand in five of Barcelona's seven goals meant that the starring role went to Fabregas.

The former Arsenal man was Barcelona's second highest scorer in the league last year- with 14 strikes. No wonder United are desperate for his services. But, with Fabregas being groomed as Xavi's successor, the smart money would be with him staying at the Nou Camp.