Beauty of the Beautiful game 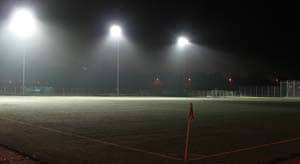 As I finish my morning news duties at NDTV, I decided to surf NDTVSports.com and read some of the blogs that have been written over the past couple of weeks. Believe you me I wasn't surprised one bit that more than 90% of the featured blogs were on cricket. Should Dhoni be captain? Is India playing too much cricket?

As I finish my morning news duties at NDTV, I decided to surf NDTVSports.com and read some of the blogs that have been written over the past couple of weeks. Believe you me I wasn't surprised one bit that more than 90% of the featured blogs were on cricket. Should Dhoni be captain? Is India playing too much cricket? The never ending tales and stories of the BCCI or the celebration surrounding U-19 Captain Unmukt Chand's arrival in Delhi post their World Cup win.

Thus, I have decided to do my bit by not writing anything on the gentleman's game. Instead, why not focus on the beautiful game. Having said that football isn't devoid of the many off-field controversies that cricket witnesses and we as journalists love to follow (controversy = TRPs). To name just a few - John Terry couldn't keep his pants up, Ashley Cole never kept his pants up or the various embezzlement charges leveled against FIFA and its President Sepp Blatter. Having said that Lionel Messi is still scoring goals by the dozen, his latest being his 21st hat trick for Barcelona (The 2nd of which was an absolute cracker). Though his biggest and probably most precious goal till date will be the birth of his first child sometime this week.

Shifting to England and the Chelsea revolution seems to have taken everyone by storm. 34 goals in all competitions and an unbeaten start to the season (till the Shakhtar loss) prove just that. As much as I hate to say it Manchester United has made one of the best signings in Robin Van Persie (I'm an Arsenal fan). 8 goals in all competitions and an injury free RVP means United have an extremely potent attack. Manchester City seem to be doing just fine in the one season they haven't spent dollops of cash on players while Arsenal just won their first title in 7 years for providing the 'best customer service to their fans' (RIP Gunners fans).

Talking football closer home and everyone seems to have an opinion (mostly negative) on Indian football. It shows how the game has come a long way from the days when no one knew anything apart from Bhaichung Bhutia. I was recently asked to moderate a session on Indian football at a sports summit and the audience got pretty vocal once the floor was thrown open for questions. Most were pointing fingers at the AIFF, some were just trying to speak for the sake of it, while some just came to have free tea and biscuits. In the midst of all this I was handed a slip from an audience member, his question: Is enough being done to advertise Indian Football and the I-League? Time constraints meant I couldn't answer the question then but let me tell you now - close to nothing is done to advertise the I-league. How many of you know any starting 11 players for Dempo? Salgaocar? How many of you know which club India International Gouramangi Singh has signed a 2 year deal worth more than 1 crore for?

Despite the criticisms Indian football is slowly moving on the right path with emphasis being made at the U-14 level for a brighter national team in the future. I for one hope that happens soon as theirs no greater feeling than watching your national team perform in front of your eyes.

Comments
Topics mentioned in this article
Arsenal Manchester United Wayne Rooney Alex Ferguson Football Mexico South Africa Republic of Ireland FIFA France Chelsea
Get the latest updates on IPL Auction 2023 and check out  IPL 2023 and Live Cricket Score. Like us on Facebook or follow us on Twitter for more sports updates. You can also download the NDTV Cricket app for Android or iOS.