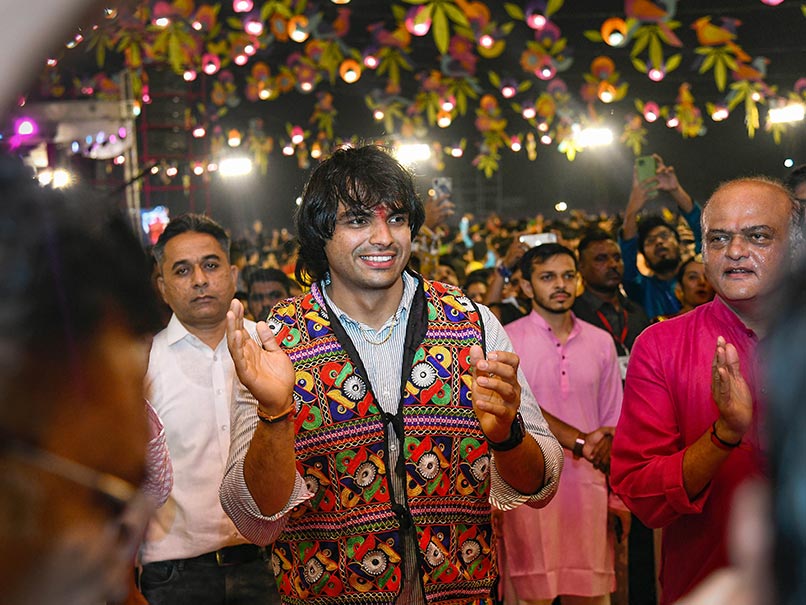 Neeraj Chopra at a Garba event in Vadodara.© PTI

India's Olympic gold medallist Neeraj Chopra on Wednesday attended a Garba event in Gujarat's Vadodara. He was given a grand reception and the excitement of the crowd was palpable. He was seen doing the Puja before performing a Garba dance with some of the members at the event. The crowd was seen chanting loudly when Neeraj went up on stage. In another video, he was also seen waving at the crowd from the stands.

Olympic Gold Medalist and World Champion @Neeraj_chopra1 joins in to enjoy garba in #Vadodara, which is part of the Navratra celebrations in Gujarat, during his visit for the #36thNationalGames pic.twitter.com/Zj0UDpbw3l

The enthusiasm and celebrations at the garba ground multiplied when he surprised his fans at the spot#36thNationalGames #NationalGames2022 pic.twitter.com/VYxyhIFwIM

2022 was a great year for Neeraj Chopra. He broke the national record for javelin throw twice, while also winning the silver medal at the World Athletics Championships.

He then capped it off by winning the Diamond League final in Zurich.

The only blip in the year for Neeraj was when an injury picked up at the World Championships ruled him out of the Commonwealth Games in Birmingham.

With the Diamond League final, Neeraj's season this year came to an end and he is now going to focus on next year's events.

Sponsored by Vuukle
Comments
Topics mentioned in this article
Neeraj Chopra Athletics
Get the latest updates on IPL Auction 2023 and check out  IPL 2023 and Live Cricket Score. Like us on Facebook or follow us on Twitter for more sports updates. You can also download the NDTV Cricket app for Android or iOS.